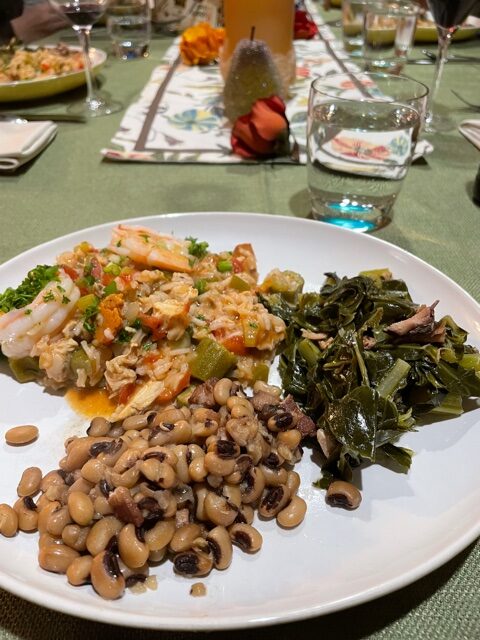 Jambalaya is a classic Cajun dish that involves what is known as the holy trinity in Cajun cooking: onions, celery and bell peppers.

Cajun and Creole are often thought to be of the same origins, but while each share a distinctly French background, their path to America couldn’t be more different.

In short, Cajuns came to America by way of Eastern Canada while Creole folks came by way of the Caribbean.

During the French Revolution, French dissidents fled the republic and sailed across the Atlantic landing in what is now Eastern Canada. At the time, the area of current Newfoundland and Nova Scotia were known as Acadia. Their people were dubbed Acadians which many years later was reassembled to become Canadians.

Around the same time, French upper crust citizens along with Spanish gentiles left Europe and sailed past Africa and into the Caribbean islands. There, they stayed for many years and the French, Spanish and African people co-mingled and spawned a new genetic group later referred to as Creoles (from the Spanish word “criollo” loosely meaning “someone born in a country but of a people not indigenous to it.”

Soon, this breed of Creoles would sail north into what is now Louisiana.

Meanwhile, back in Acadia, the British began plundering the Eastern Coast of North America in the mid 1700s. In Eastern Canada, many of the French natives decided to leave rather than fight or be persecuted.

They had heard of an area in the southern part of what was become the United States called New Orleans and migrated south. (Many French settlers chose to stay which is why, to this day, parts of Eastern Canada like Quebec and Montreal are still decidedly French in language and culture.)

So now the Cajuns and Creoles have their own little French oasis in southern Louisiana. They don’t always see eye-to-eye as they are from vastly different experiences.

Their differences extended to their food.

Cajun food is more comfort and homey with a minimal amount of spices and using ingredients that could keep fresh through long winters.

Creole food with its Spanish and African influences include a larger variety of spices and lots more seafood associated with the geography of Louisiana and the Gulf. Think crawfish etouffee, catfish and oyster po’boys and seafood gumbo.

You can’t go wrong with either fare, but if you’re looking for a warm, wonderful and comforting dish that can fee a group of ten or more, this Jambalaya dish is a foolproof go-to.

You can serve this with any grain but we recommended old-fashioned white rice as the perfect supporting cast.

It’s an excellent and colorful holiday meal as well.

4 ½ cups water (using the reserved from the chicken boil)

In Dutch oven, lightly brown sausage. Remove. (If pre-cooked, no need to brown.)

Add tomatoes, chicken and sausage to the pan. Add the water. Bring to boil. Add spices and rice. Simmer, covered for 35-40 minutes or until rice is tender. (Check at 30 minutes.)

In a smaller pot, boil water and drop in the shrimp until pink, maybe two minutes. Drain.

When rice dish is tender, pour the mixture into a large serving platter. Top with the parsley and scallion mixture. Lay drained shrimp on top and serve.

Bottles of Crystal hot sauce should be nearby for regular dousing throughout the meal.