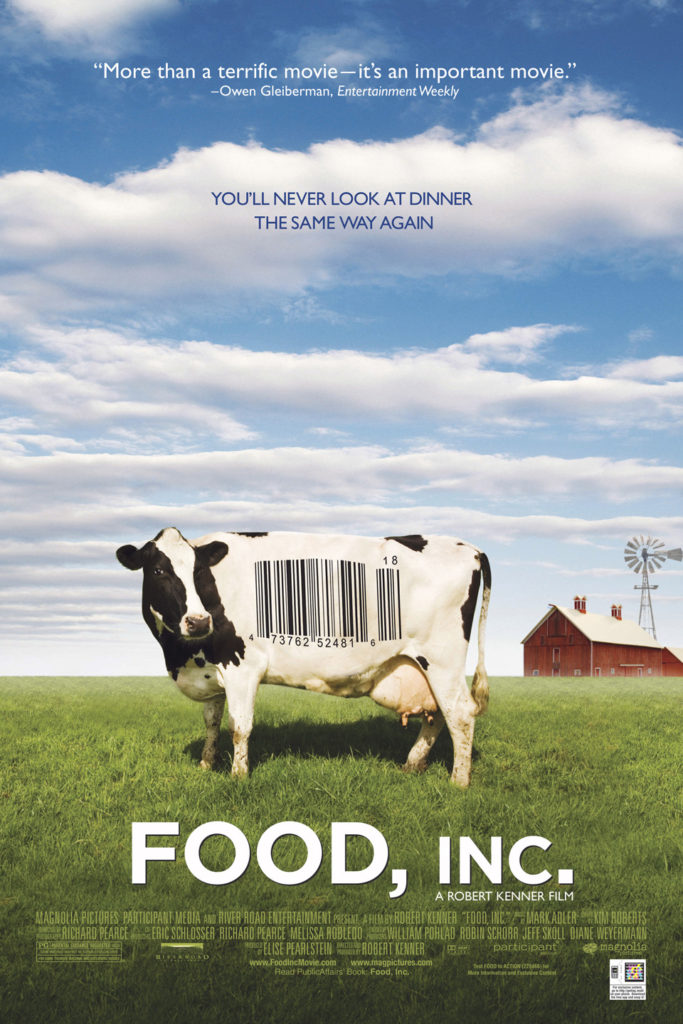 If it’s true we are what we eat, then the documentary, Food Inc., makes a clear argument that we are all comprised of corporate cover-ups and political profits. One thought-provoking, often stomach-turning segment of the film highlights the mostly filthy, almost always cruel treatment of animals born to be slaughtered for human consumption. From the chickens raised in foul, dark dungeons and force-fed at such an alarming rate to inflate their weight which cannot be supported by their languishing limbs to the crowded herds of cattle, often pumped with toxic chemicals to ostensibly prevent diseases caused by standing most of their short lives up to their knees in feces which can precipitate the onset and spread of the deadly e-coli virus; clearly this is animal cruelty disguised as big business. Even more alarming is the domino effect of diseases that pervades other food sources, such as the natural runoff of cattle feces that spreads into nearby spinach farms, thus poisoning those crops with even more e-coli bacteria.

All of these harmful scenarios beg for greater government scrutiny, but as the documentary suggests, the monopolistic nature of the few, powerful companies that control much of the meat (Tyson Foods and Smithfield) and mass farming industries (Monsanto Corporation) may never be tightly controlled or even closely inspected thanks to complicity at some of the U.S. government’s highest levels.

Monsanto Corp., in just one example of Capitol Hill collusion, is a monopoly-minded company that specializes in genetically engineered seeds that can be used year after year along with crop “protection” chemicals. Monsanto had long claimed that its patents were being violated by small farmers who would similarly re-use seeds after an initial harvest to cut down costs. That patent case was taken all the way to the Supreme Court, where the Court ruled in favor of the $13.5 billion-a -year company, effectively putting more money in their pockets from the small farmers who thus had to pay for rights to use these preferable seed sources. Probably not ironically, one of the Court judges who ruled in favor of Monsanto was Justice Clarence Thomas who, from 1976-79, was a lawyer for the Monsanto Corp.

Ultimately, Food Inc. is a cautionary tale of big business-as-usual with the consumer’s well-being the least of the corporate concerns. Consider the case of Kevin Kowalcyk. In 2001, the previously healthy two-year-old died of e-coli infection 0157:47 just 12 days after consuming a tainted fast-food hamburger.

His mother, Barbara, subsequently founded the Center for Foodbourne Illness and lobbied Congress to enact what she called, “Kevin’s Law,” which, in short, would give the USDA the power to close down plants that produced contaminated meat. At the time of Food Inc.’s release in 2008, “Kevin’s Law” had still not passed despite multiple alterations, which makes what we chose to consume more than just food for thought, but sometimes a life and death proposition.

(Footnote: In January 2011, President Obama signed into law the FDA Food Safety Modernization Act which contains key elements of “Kevin’s Law” by requiring the FDA to inspect meat facilities more frequently (every 5-7 years instead of every 8-10 years), and improve food trace-back systems and foodborne illness surveillance efforts. The law also requires imported food to meet the same standards as domestically produced food and contains provisions to better address the needs of small farmers.)