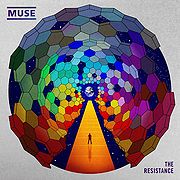 When Muse first cracked the charts in the States they were often compared to Radiohead and, indeed, “Time is Running Out” was the best Yorke-inspired single with a backbeat since “Idioteque.” But I always thought Muse was more akin to early Queen, and their newest album, The Resistance reinforces that position with operatic choruses and grandiose piano-based sweeps.

The Resistance is a sturdy follow-up to Black Holes with passages that swoon and rock with confidence. Matthew Bellamy, the band’s guitarist, pianist and songwriting genius, is in full rock-god mode, and the band’s prog and circumstance style has never been crisper.

Opening song and single, “Uprising” is clearly built for stadium sing-alongs and the title track could make Freddy Mercury rise from the dead to play along. As with their previous efforts, the band changes moods constantly, shifting from melancholy blues (“I Belong to You”) to crunchy rock quarries like “Unnatural Selection” that brings back the sprawling riffs and pace changes of “New Born” from three albums ago.

Bellamy’s bleeding heart lyrics have always been best served for his bleeding heart tales of love’s labour’s lost rather than liberal agendas as evidenced here with the floating turd that is “The United States of Eurasia.” Otherwise, his phrasing is concise and his leads super tight to support the ever-changing cadences.

The beauty of prog rock is the pompousness of the style, and Muse has always shot for the over-the-top notes, usually to great success. This album would be their defining moment had they not indulged in a turgid closing act of a “song” called “Exogenesis” that plays out in three parts with a beginning, no middle and no end. Thirteen minutes of a classic suite with no intensity was a daring, but ultimately dreary way out of what could have been the best album of the band’s career.

Take that composition out of the equation, and this then becomes the best EP of the Muse’s canon.